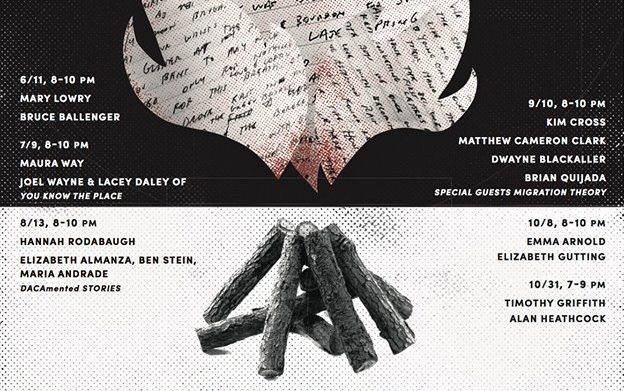 Modern Hotel and Bar presents Campfire Stories | 2018 at Txikiteo Boise with host, author Christian A. Winn. Come share amazing bites, toasts, and stories around the patio campfires with some of the best writers and artists Idaho has to offer.

This month Campfire Stories will feature wonderful writers and artists Kim Cross, Brian Quijada, Matthew Cameron Clark, and Dwayne Blackaller of Boise Contemporary Theater as well as special guests Migration Theory.
FOOD & DRINK SPECIALS: We’ll be serving paella, bread, and green salad for $18 per person, beginning at 6:45pm. We’ll also have house-made Sangria for $5 a glass!
Free Admission | All Ages
KIM CROSS is an award winning journalist and author of What Stands in a Storm: Three Days in the Worst Superstorm to Hit the South’s Tornado Valley, a gripping account of the climax of a deadly superstorm that saw a record 349 tornadoes rip through twenty-one states in three days, seven hours, and eighteen minutes. Blending both the journalistic and dramatic, the book is based on more than a year of meticulous research and forensic reporting to recreate cinematic scenes with gripping detail, as well as the added profundity of a redemptive message that’s just as real as the storm.
www.kimhcross.com
—
BRIAN QUIJADA is an actor, playwright, musician. Brian was born in the Greater Chicagoland Area to Salvadoran parents. Quijada is a two-time Jeff Award winner in Chicago and a two-time Drama Desk Nominee in NYC. He is a proud member of The Ensemble Studio Theatre in New York City. Brian’s writing in new theatre focuses on immigration, the human condition, identity, and the American experience while incorporating elements of his Latinx upbringing.
www.brianquijada.com/
—
Boise Contemporary Theater strives to be the place people choose for transformational experiences, and recognized as an irreplaceable driver of the arts and culture in Boise and beyond.
—
MATTHEW CAMERON CLARK is the Founding Artistic Director of Boise Contemporary Theater and a seventh generation Idahoan. He has co-written four plays with Dwayne Blackaller: A Nighttime Survival Guide, The Uncanny Valley, Narwhal! Unicorn of the Sea, and Rabbit/Moon, which will premiere at BCT in April. He has worked as an actor or director on more than fifty professional productions, including World Premieres by Samuel D. Hunter, Maria Dahvana Headley, Eric Coble, and Jeni Mahoney. Matthew is a recipient of the Boise Mayor’s Award for Excellence in the Arts and an Idaho Commission on the Arts Fellowship. He lives in Boise’s North End with his extraordinary children, Rafferty and Tilly, and their dog named Blue.
—
DWAYNE BLACKALLER an actor, writer, teacher, and director. He is the Associate Artistic Director at BCT and the Director of Theater Lab, BCT’s new educational program.
www.dwayneblackaller.com/
—
Migration Theory most recently created small matters: a big project about little things which took place in west downtown Boise. We are a physical art company creating original work that is kinetic, participatory and heartfelt. Migration theory will be reading from material past and potentially future.
#txikiteoboise #campfirestories2018 #boisewinebar
#campfirestoriesboise #campfirestoriestxikiteo