Click here to order meals made with ingredients sourced from local purveyors, batched cocktails, wine, and local brews to enjoy at home!

Fiber artist Jo Hamilton moved to Portland after graduating from the Glasgow School of Art in Scotland. Educated as a painter, she eventually began to explore the representational possibilities of crochet. She depicts the urban fabric of Portland and its people, using traditional materials, such as yarn, as well as alternative materials, such as plastic and parachute cord.

Hamilton learned to crochet from her grandmother, and the link between craft and human relationships pervades her work. Her portraits and cityscapes stem as much from the traditional handicrafts passed down to her by her grandmother as from her training in fine arts. By combining the traditions of crochet and academic painting, Hamilton’s work draws viewers into a world in which looking, knowing, and making are bound together. 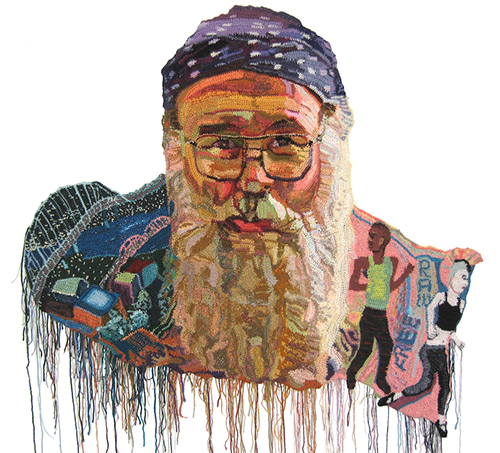 Rather than working from patterns, Hamilton achieves her likenesses by knotting, unraveling, and re-knotting her compositions until securing accurate representations of her subjects. This attention to detail, combined with her unusual choice of materials, imbues even Hamilton’s large-scale works with a surprising warmth and familiarity, whether of the sprawling urban environment or its residents.

Jo Hamilton: Knots in Time includes intimate portraits of the artist’s friends and family alongside a series of portraits based on mug shots from Multnomah County. The exhibition also highlights several of Hamilton’s expansive cityscapes that provide a commentary on Portland’s development boom.

Organized by the Boise Art Museum

Sponsored by BEV AND GEORGE HARAD